Studies have found that the stomachs of a captured wild discus fish contain small shrimp, insects and insect larvae, small fish and fair amounts of plant material. When discus fish eat, they appear to mouth the food and spit it out before recapturing it and swallowing it. The reason for this is their teeth, or lack of teeth. Discus fish do not have teeth, but rather grinders in the jaw. The scientific name ”symphysodon” means jaw grinders. So when the discus fish is eating, food is taken into the mouth, ground up and spit out, then picked up again for regrinding before swallowing. During this process, many food particles fall to the bottom of the discus fish aquarium. Discus fish will expel water at foods resting on the aquarium bottom, then pick them up as they float. Discus fish are poor predators and many baby guppies have grown to maturity in a discus aquarium. This behavior in feeding discus fish indicates a discus fish diet consisting primarily of nonmotile worms, crustaceans and insect larvae. Studies done on commercial fish show different needs for carnivores versus herbivores, fresh versus marine and cold versus warm water fish. By comparing the requirements of fresh water carnivores, which live in a warm environment, we should be able formulate a complete discus fish diet. 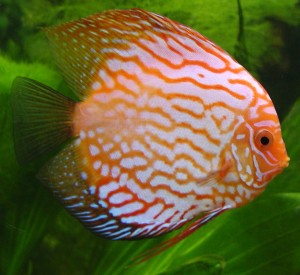 We can summarize the following on the discus fish diet: