With a compressed rounded body shape and gorgeous colors of green, red, brown and blue, discus fish are among the most popular aquarium freshwater fish in the world. Native from the Amazon River, discuss fish are spread all over the world being part of true industries in Asia, for instance. When they reach adulthood, discuss fish are no larger than eight to ten inches and they make great pets, bringing a drop of lively color to your house. Make sure you know everything about the needs of this fish breed, though discus fish are not very fragile, they still require a lot of care. 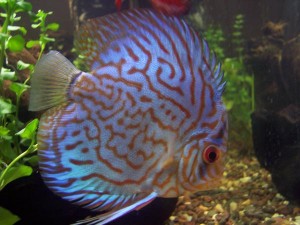 Discus fish make great aquarium inhabitants and they can be combined with other species in the habitat, the best choices would be the tetras or the uaru species. Generally discus fish are very peaceful creatures; they are a bit sensitive to stress and a disturbing environment. However it is not too great an idea to combine them with fish that are a lot smaller, as the discus fish may eat them. It is totally unadvisable to combine catfish with any variety of discus fish since the former may eat the latter. Like all aquarium creatures, discus fish require optimal living conditions; otherwise they are exposed to disease and may die.

As the natural water temperature the discus fish are used to, is around 26-31 degrees Celsius, you will have to recreate and maintain the same conditions. Furthermore, in the wild, the environment discus fish live in is slightly acid, so make sure you adjust the pH values to such coordinates, between 5.5 and 6.5 the pH is completely friendly to your pets. If the discus fish were bred in captivity they may just as well adapt to higher pH values, but not during the mating season when you really have to provide optimal conditions.

Keep in mind that discus fish are very clean animals, and the water you put in their tank has to be really clean, without the slightest trace of pollution. You need to use a high capacity filter to cycle the water continuously. There are plenty of information sources to learn more on discus fish and their breeding. Always stay informed on feeding and breeding habits of your friends, as you’re thus watching over their health.

Discus are color blind when it comes to breeding, so any one color will pair up with a different colored one, to create surprises, that are then selectively bred for the Discus lovers around the world. A shy fish, the discus will react in blind fear, & dash off into the tank wall, if you are not careful when entering into the area where it is kept. I created a species specific tank for them with many plants & a school of “Dither” fish. Fish, for a poorly known reason, can react, seemingly instantaneously, similar to flocks of birds that one can see wheeling around & turning in unison. The strange thing about fish is that they don`t have to be a member of a particular school, nor to even be a schooling fish, to react like all the others. The dither fish are usually a much calmer fish that won`t panic easily. As long as these fish are acting calmly, the Discus are reassured & feel that there is nothing to panic about.